Dr Anne Ross says: “British coins and metalwork provide some of the earliest examples of the cult of the head in fully Celtic times… Numismatic evidence testifies to the importance of the human head in Britain” (Pagan Celtic Britain, 1967, p.68). See Anne Ross, Celtic heads and holy waters, in Chris Rudd List 32, 1998, p.2-4. 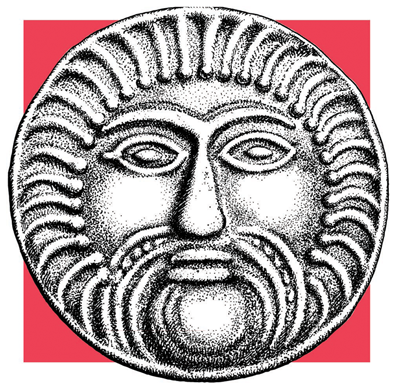 The head on this rare Cunobelinus bronze unit, ABC 2912, may be of the sun-god Belenus ‘the shining one’ celebrated in the May Day festival as Beltaine ‘Bel’s fire’ when bonfires were lit and cattle were driven through the flames. I think it’s Belenus because he is an integral part of the king’s name – ‘hound of Belenus’ – and because his hair and beard are shown radiating from his head like sunrays. Sir John Evans wrote: “This remarkable coin cannot be paralleled in the whole British series.” Jane Bottomley’s reconstruction is based on a superb example we sold in 1995 for £850. 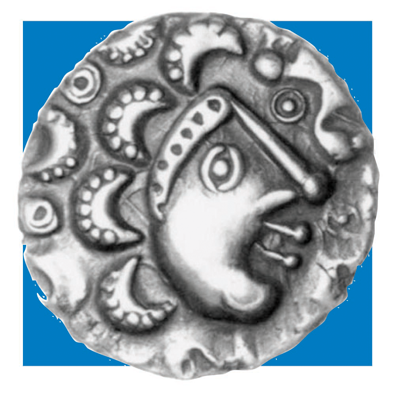 An earlier generation of cataloguers would have described this lunate head as ‘crude’, reflecting the prevailing view that Ancient British coins were slightly incompetent copies of Greek or Roman originals. Nothing could be further from the truth, in my view. British die-cutters designed heads this way for a purpose, not for lack of skill. For example, the ambiguity of the crescents – are they curls of hair or big moons with little suns on them? – is intentional, not accidental. This is a divine head, not a human head. That’s why the engraver has crowned it with a coronet of cosmic light – moonlight and sunlight. And he tilted the eye vertically, not because he couldn’t draw properly, but to create a potent staring effect, as if the eye was gazing directly at you. The small horse to the right confirms that the head is meant to be seen as larger than life and that the deity has equine attributes. Cotswold Cock silver unit, ABC 2012, CCI 98.0166, ex Warwick collection (Chris Rudd List 52, 2000, No.50), ex Leonard Cohen collection. 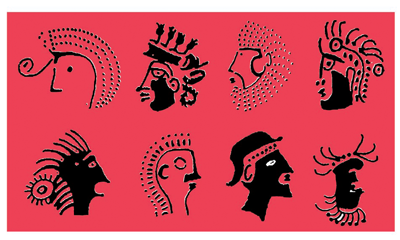 Eight of the 400 extraordinary heads seen on Ancient British coins, drawn by Richard Hobbs and Paul Charlton, from R.Hobbs, British Iron Age coins in the British Museum (1996). © The British Museum. 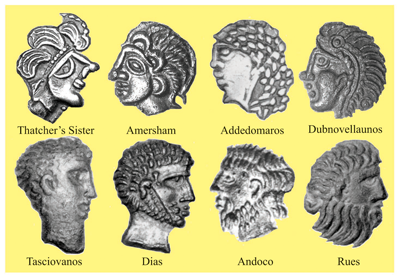