Coins were a Mediterranean idea conceived in Lydia c.6th century BC. They remained in the Mediterranean until Northern Gaul, Iberia and Britain wanted to trade with the Greeks and Romans. Gaul’s first gold coins were copied from Philip II of Macedon’s gold staters.

Britain’s first regular home-made coins were bronze coins copying those of Massalia (Marseilles). Made in Cantion (Kent) c.120-100 BC, they circulated alongside gold coins imported from Gaul. During the Gallic Wars, 58-51 BC, many other Gaulish coins – gold, silver, bronze – came to Britain, some brought by refugees, others by mercenaries and merchants. 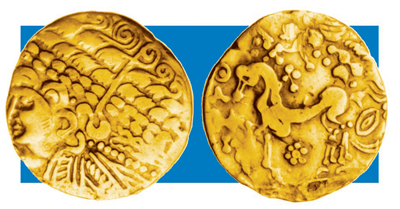 South of the Thames

Britain’s most famous refugee was Commios, a former ally of Caesar. He ruled the Regini and Atrebates in southern Britain c.50-25 BC and was the first British king to place his name on coins. His three sons – Tincomarus, Eppillus, Verica – made the Commian dynasty the most powerful south of the Thames. Most of their coins adopted Roman imagery. 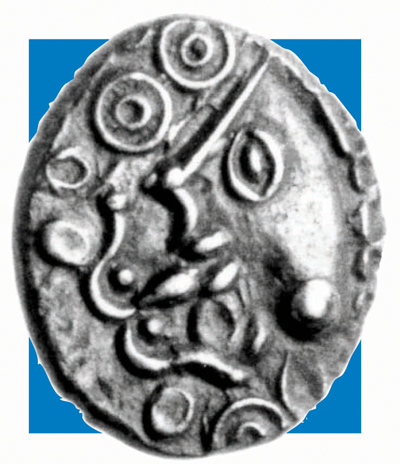 North of the Thames

The main rivals of the Regini and Atrebates were the Catuvellauni of Hertfordshire. Their first known ruler was Cassivellaunos who fought Caesar in 54 BC. Many of Britain’s earliest gold coins were probably struck to fund resistance to Caesar and then to pay tribute to him. Addedomaros was the first ruler north of the Thames to inscribe his coins, perhaps copying Commios.

King of the Britons

The Catuvellauni expanded under Tasciovanos. His son Cunobelinus was the most potent tribal king in Atlantic Europe. Suetonius called him ‘king of the Britons’. When Epaticcus and Caratacus attacked the Atrebates, king Verica fled to Claudius who invaded Britain in AD 43. The minting of tribal coins ceased shortly afterwards. For more info ask liz@celticcoins.com or read Britain’s First Coins. 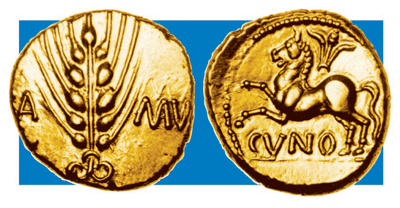