What’s so special about Celtic coins? What’s making them increasingly popular with collectors all over the world? We all have our own reasons for liking Celtic coins. Here are mine, says Elizabeth Cottam.

I love the Celticity of Celtic coins. They were produced by peoples who all spoke Celtic, the old mother tongue of so many countries in Europe. Did you know that the earliest recorded Celtic language comes from Spain?

This Gallic bronze type, ABC 115 – made for trade, branded MA for
Massalia – inspired a Cantian king to mint the first coins made in
Britain. Found near Chichester, W.Sussex, 7.10.1998. Others found in Kent.

I love the vast variety of Celtic coin types. Before I joined Chris Rudd in 1998 I’d no idea there were so many. Britain alone minted 1,000 different types, as you’ll see when you look at Ancient British Coins (Chris Rudd 2010) which I co- authored. Meanwhile you can view some typical examples from each tribe.

I love the tribal vibe of Celtic coins, with each tribe having its own distinctive coinage, so unlike the blanket blandness and universal uniformity of national coins today. Some coins carried tribal symbols. For the approximate location of the sixty tribes of Britain and Ireland, including those that minted coins, plus possible mint sites, see my map Tribes of the British Isles. 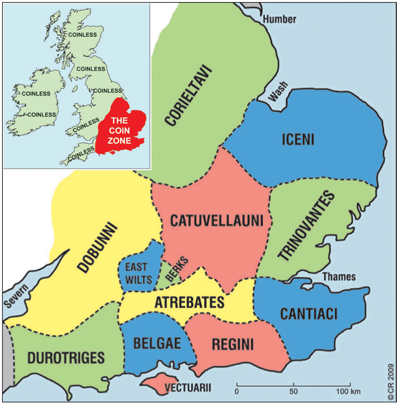 13 possible tribal groups were producing coins by c.50-40 BC
(Cantiaci much earlier). Tribal names, recorded in the Roman era,
may not be accurate. Tribal boundaries, as shown here, are speculative.

I love the regality of Celtic coins – rulers regaled with royal coronets, diadems and golden neck torcs symbolic of their sacral kingship. The very sound of their cocky monickers – Dubnovellaunos ‘ruler of the world’, Addedomaros ‘great in chariots’ – is cheering to my ears. You’ve heard of King Arthur, King Alfred and William the Conqueror. But how many pre-Roman rulers can you name? Two? Five? Ten? See my table of Ancient British kings. 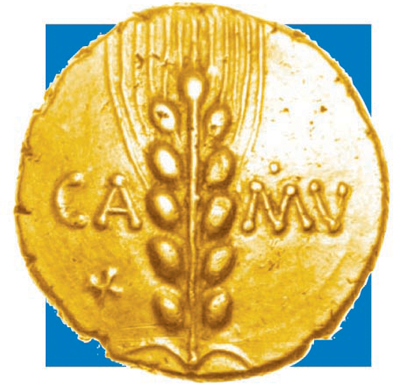 We think that Ancient British gold coins, maybe silver too, were probably ‘king’s
money’ minted mainly for the ruler’s personal benefit, whether to pay troops or tribute,
buy royal goods or services, curry favour with peers or proles, or bribe the gods. This gold
stater, ABC 2774, was struck at Camulodunon (Colchester, Essex) for King Cunobelinus
‘hound of Belenus’, the most potent tribal king of his time – the most powerful in Atlantic
Europe – who personally controlled more land, more lives and more wealth by AD 41 than
any other tribal leader west of the Rhine. Chris Rudd List 54, 2000, No.75, £2000.

I love the freedom fighters on Celtic coins, those brave warrior-kings and warrior-princes who opposed the power of Rome, like Vercingetorix and Caratacus.

I love the Roman love affair that other Celtic rulers had, importing fine Italian wine and silver tableware and copying Roman coins.

I love the handsome heads on Celtic coins – stronger, stranger, wilder, weirder, more fantastic, more surrealistic than any other heads you see on any other coins. 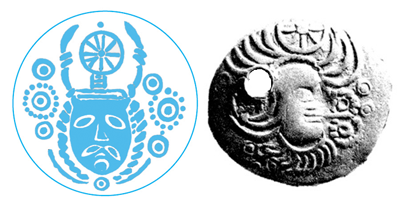 I love the amazing menagerie of creatures on Celtic coins, from bulls and boars to stags and starfish. 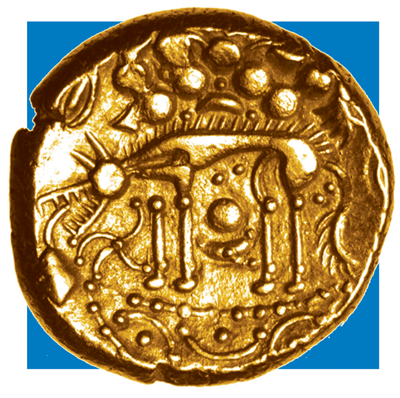 Norfolk Wolf gold stater of the Iceni, my local tribe, c.50-40 BC, ABC 1396,
found by metdet Scott Larcombe, near Lowestoft, Suffolk, 2011. This is my favourite
Celtic coin. Look at those large sharp teeth, those spiky bristles and those ‘man bits’
under the wolf’s shaggy tail. Can you see the bird perched on his rump? See Rainer Kretz,
On the track of the Norfolk Wolf, Chris Rudd List 48, and Dr Daphne Nash Briggs,
Some cosmic wolves, in Chris Rudd List 110, p.2-4.

I love the imaginative imagery of Celtic coins. This was Britain’s golden age of daring coin design, as we say in Britain’s First Coins (Chris Rudd 2013). To get a sense of how innovative Britain’s tribal coins were – each region developed its own local style – see Some typical examples from each tribe.

I love the mythic mystery of Celtic coins. I catch glimpses of long-lost legends and ancient pagan rituals, such as head hunting and bull sacrificing. I feel the power of Druid priests who probably influenced the design of many Celtic coins.

I love the miniature masterpieces of Celtic coins, especially those of silver minims. How did the ancient Brits manage to get so much detail onto an 8mm coin (smaller than my smallest fingernail)? How did they standardise the weight at ¼ gram?

I love the hidden humour of Celtic coins – all those smiley faces and those ‘now-you-see-it-now-you-don’t images’ as Van Arsdell calls them.

I love the astonishing astrology of Celtic coins – the galaxies of suns and moons and stars that shine and twinkle on hundreds of Ancient British coins. Once again I sense the shadowy presence of Druids.

I love the hoary hoards of Celtic coins that keep hitting the headlines. No banks in those days, no ‘hole in the wall’ ATMs. So I guess folk had no choice but to dig a hole in the ground.

Hoard of 872 Iceni silver coins found by farmer Sam Hills at March, Cambs., 1982 (photo © The British Museum). Map: where the largest of 345 iron age coin hoards have been found in Britain since the 1980s – mostly by metdets – with estimated totals.

I love the uniqueness of many Celtic coins, the exciting exclusivity of holding the only known example of an Ancient British coin in my hand. Such remarkable rarities never cease to thrill me. 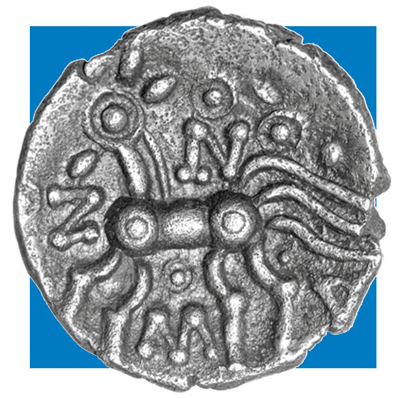 As soon as the metdet phoned me and described this coin, I knew it was unique, I knew it was important. Found near Cirencester, Glos., 12 March 2006, this silver unit (ABC 2063) is inscribed INAMN, a name only known from the bronze core of a gold plated stater found at Hod Hill, Dorset, in 1862 (see below). It validates Sir John Evans’ belief that Inamn was a Dobunnic ruler, not a ‘blundered legend’. Inamn is an abbreviation of a longer name, such as Inamnuetoutos, the father of Mandubracios (‘pony breeches’), a Trinovantian prince of the mid 1st century BC who had a similar name. I auctioned the coin for £4,200, then a record price for an Ancient British silver unit.

I love the historical importance of Celtic coins – the fact that they are helping to rewrite the history of Britain in the late Iron Age. Many of its rulers are known solely from their coins.

I love the foxy old forgeries of ancient Celtic counterfeiters. With matchless metallurgy and unrivalled guile they managed to make plated gold staters look and feel like solid gold staters.

2,000 years ago this bronze coin was concealed in a convincing coat of gold plating and
would doubtless have deceived anyone who handled it because it would have looked and felt just
like a genuine gold stater issued by the royal mint. Inamn Tree bronze stater core, c.AD 1-20?,
ABC 2060, found at Hod Hill, Dorset, 1862, and now in the British Museum where it won’t
fool anyone. Photo © Institute of Archaeology, Oxford.

I love the unpredictability of Celtic coins. New types keep leaping out of the soil. Attributions, names and dates are always being revised. Celtic studies are in a constant state of flux. Want to see three surprises?

I love the uncommon scarcity of Celtic coins. Ask any metdet how many Ancient British coins he or she has found and you’ll immediately realise that they are much rarer than Roman coins – at least a thousand times rarer on average.

Finally, I love the galloping good value of this horsey money. Their greater rarity doesn’t mean that Celtic coins are costlier than other ancient coins. In fact, they are often cheaper. For example, a very fine British gold stater typically costs less than half the price – sometimes even a third of the price – of a Roman aureus or English gold noble of comparable quality and rarity. Celtic coins are, in my opinion, undervalued coins.

Now you know why I, a Celtic dealer, love Celtic coins. If you want to know why a Celtic scholar fancies them, a friend of mine will tell you. See Dr Brigitte Fischer, Why I like Celtic coins, in Chris Rudd List 59, 2001, p.2-4. How do you feel about Celtic coins? And how can I make this website more helpful to you? Please tell me. liz@celticcoins.com